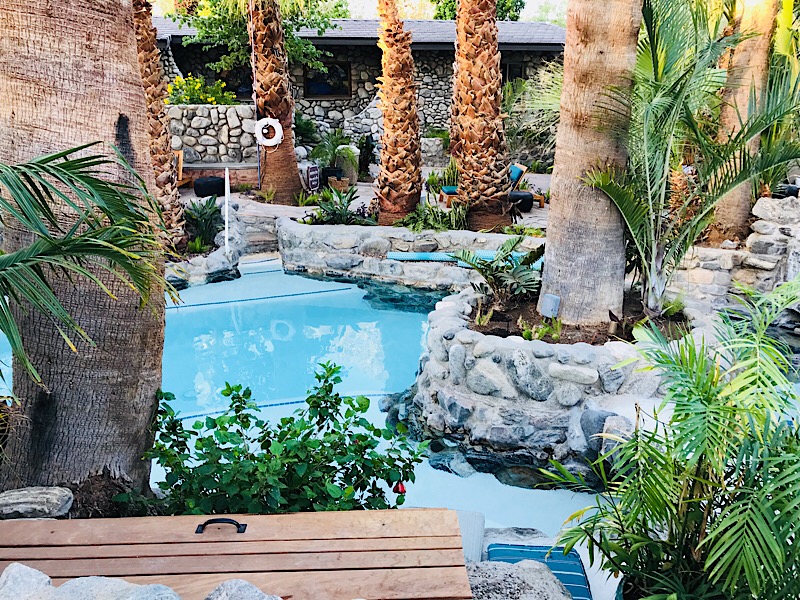 What if you could escape for a few days somewhere serene, energizing, and other-worldly? What if you could soak in an ancient hot springs grotto under the desert stars, enjoy a healing session with a resident shaman, and take a sound bath with gongs? What if you could savor gourmet farm-to-table dining and sip fine wines IN YOUR BATHROBE? What if I told you this place is less than three hours away from Coronado?

Welcome to Two Bunch Palms in Desert Hot Springs. Immortalized in the 1992 Robert Altman film “The Player” with Tim Robbins, Two Bunch has long been on my bucket list. A healing hideaway, this eco-resort and spa is off the beaten path located 10 miles North of Palm Springs. Frequented by L.A. studio execs and Hollywood hipsters alike, Two Bunch Palms soothes the world-weary with its peaceful and meditative energy.

According to the Hollywood Reporter, the property came under disrepair during the real estate bust and underwent foreclosure in 2010. In 2012, two Hollywood film execs and a real estate developer bought the 77-acre retreat for less than $10 million. They promised to return the property to its original glory with higher-end accommodations, while honoring the land, the folklore, and the natural environment.

And honor it they do! The trees are blessed before they are cut down, and invited to return back into the plant world, according to the resident shaman who met with us during our stay.

Sounds nice, doesn’t it? Needless to say, when one of my besties organized a retreat at the property for her birthday, I booked my room.

I was delighted to see that Google Maps put Two Bunch less than 2.5 hours from Coronado. Radical!

Two Bunch is kind of in the middle of nowhere, just past those weird windmills. (Let’s just say there don’t appear to be a lot of compelling reasons to leave the resort. And that’s just fine with me.)

The entry is unassuming yet inviting. We noticed that there is a big board with TONS of classes included in the stay, ranging from yoga and pilates to angel card readings to how to discover your spirit animal. (More on that later.)

But first things first. The first thing you notice is the intense energy of the resort. When we arrived the wind was blowing, which could be unnerving, but was actually calming in a feral, restless-desert-spirit sort of way. A visitor said, “the sound of the wind moving in the mature trees and native shrubs is soothing. These active molecules seem to surround you, as if to emphasize your presence in the moment.” I couldn’t agree more!

According to an article in the Coachella Valley Weekly, “Once referred to as Spa City, Desert Hot Springs has long claimed to be situated in a vortex that promotes health and wellness. The theory is: The city’s natural elements of mineral water, unspoiled mountain and desert expanse, its elevation, earthquake faults, wind and sunshine create a significant energy field. It’s believed the vortexes are negative ion generators influenced by magnetic forces, which produces positive energy, well-being and healing.”

Now, let’s check out my room. A 10 minute walk from the restaurant and the grotto, it was vintage-hip, clean and comfy with some quirky touches like woven macramé and some earthy textures and finishes. The back opened up to a dirt courtyard which contrasted with the polished interior, but not terrible way. (More like a messy hair, don’t care kind of vibe.) 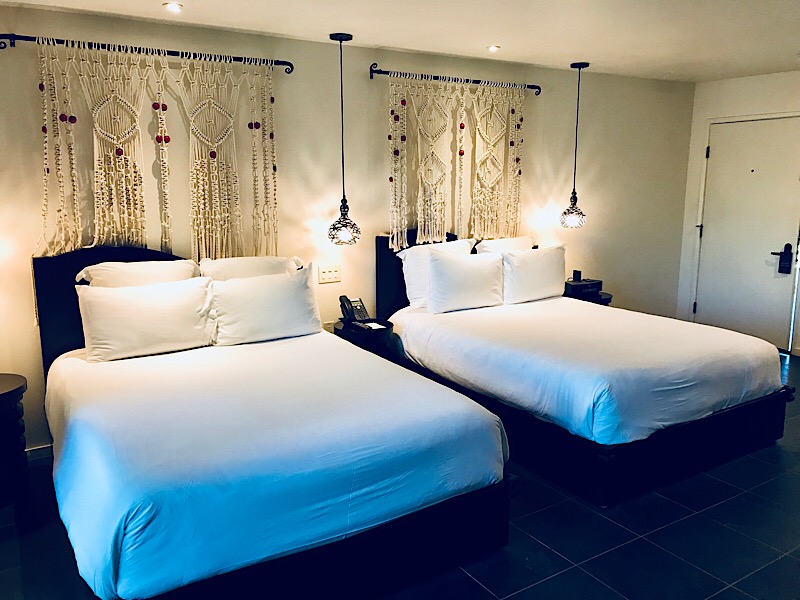 First on the agenda…slipping into my bikini and the comfy terry cloth bathrobe and slippers provided by the resort. The property has a zen, bohemiam-attitude which means you can wear your bathrobe EVERYWHERE…even to the nice restaurant! 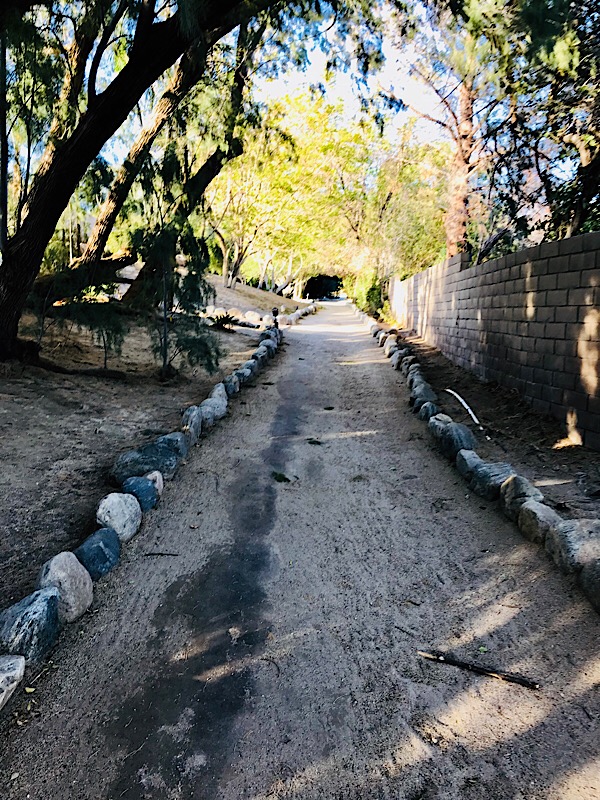 The grounds are sprawling and gracious, without being over done. A lovely dirt path led me back to the main part of the resort, where I passed gurgling streams from the natural hot springs (I felt the water, it was warm), and a meditative stone labyrinth. (My friend tells me that you can enter the labyrinth with an intention or a question, and as you walk the answer will come to you. I tried this on my last day, and it worked.)

In addition to natural springs, the property has a pond brimming with koi and turtles, several communal fire pit areas and more than 1,500 additional plantings, including 60 mature palm trees. 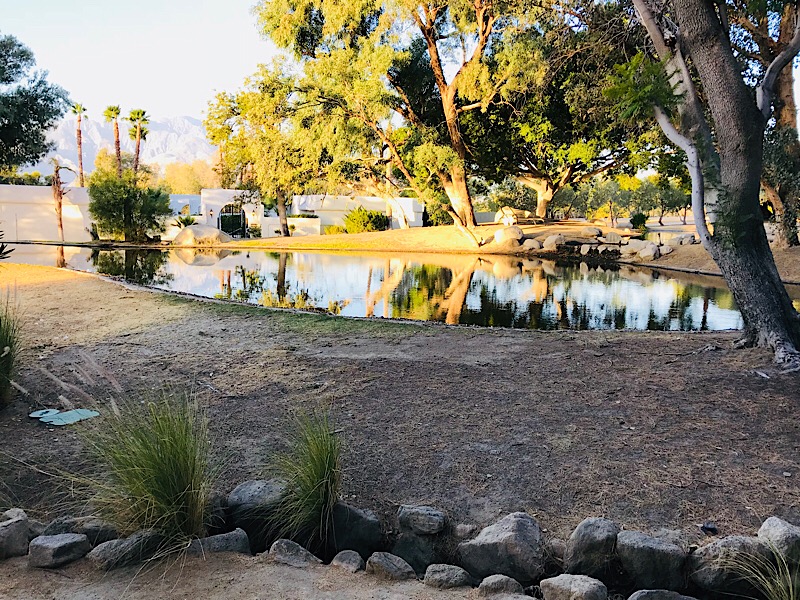 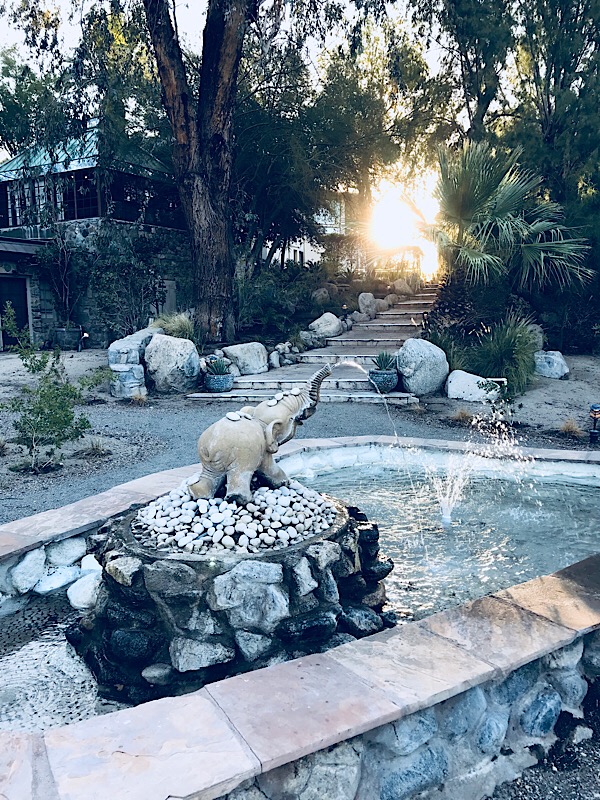 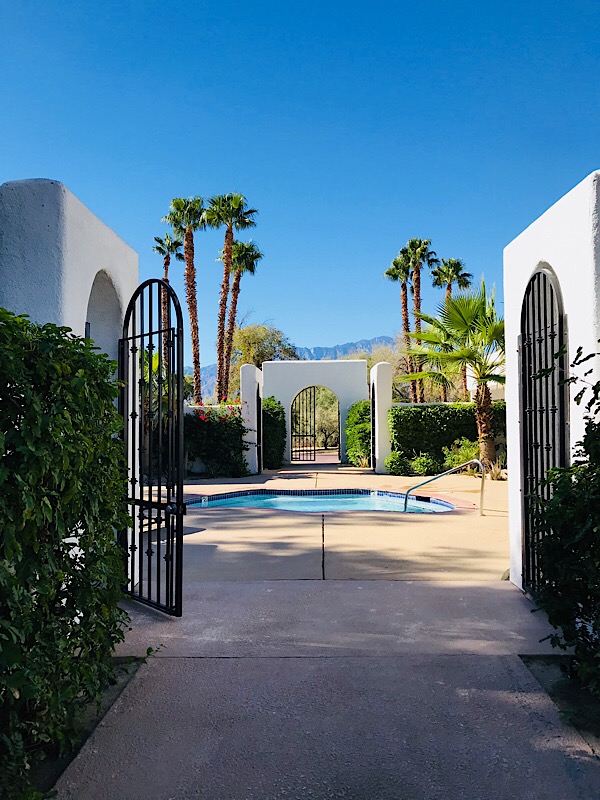 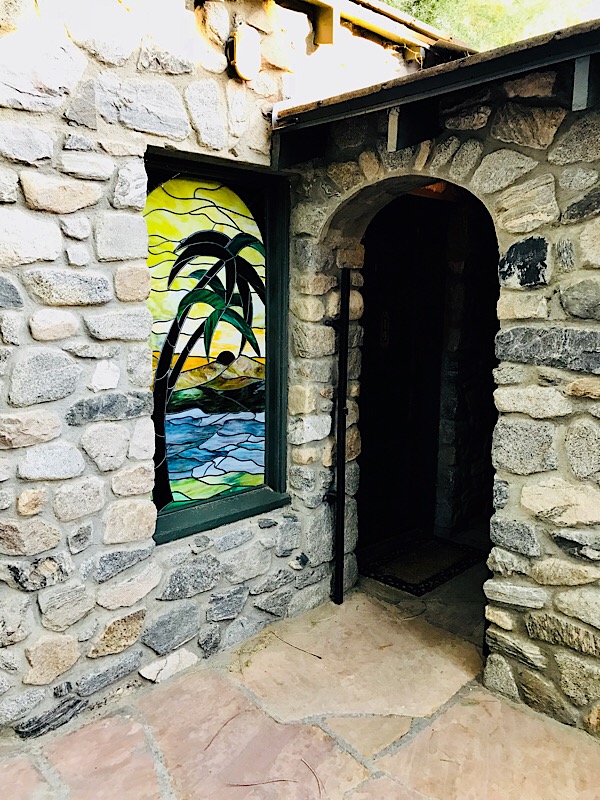 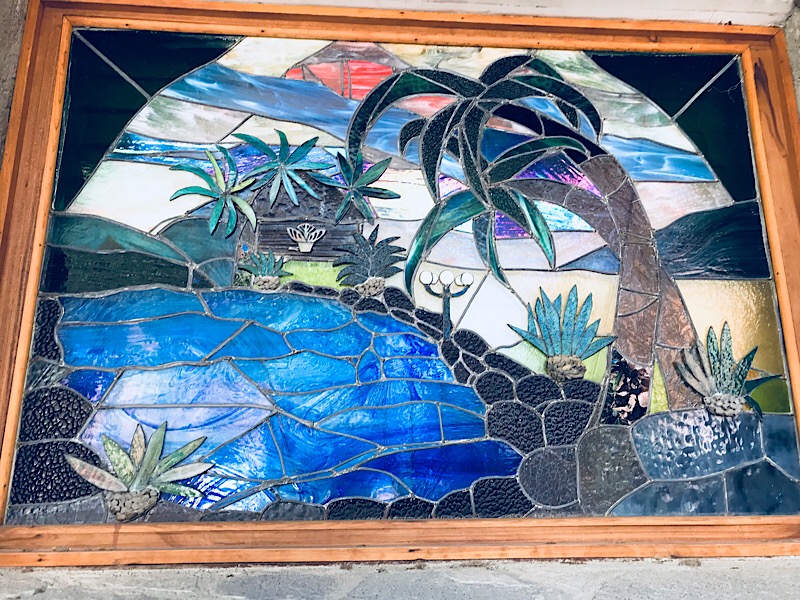 But the main draw of the property is the grotto, a blissful, enticing retreat created by the naturally heated mineral springs and famous 600-year-old healing waters. Two Bunch Palms has also built several brand-new mineral soaking tubs, wading tubs, and cold water tubs, all gushing with mineral water that leaves the ground at more than 150 degrees F. 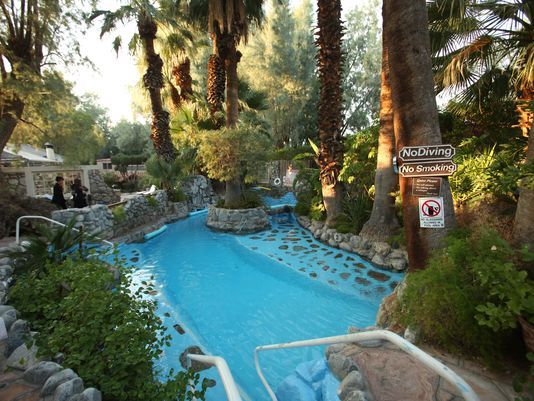 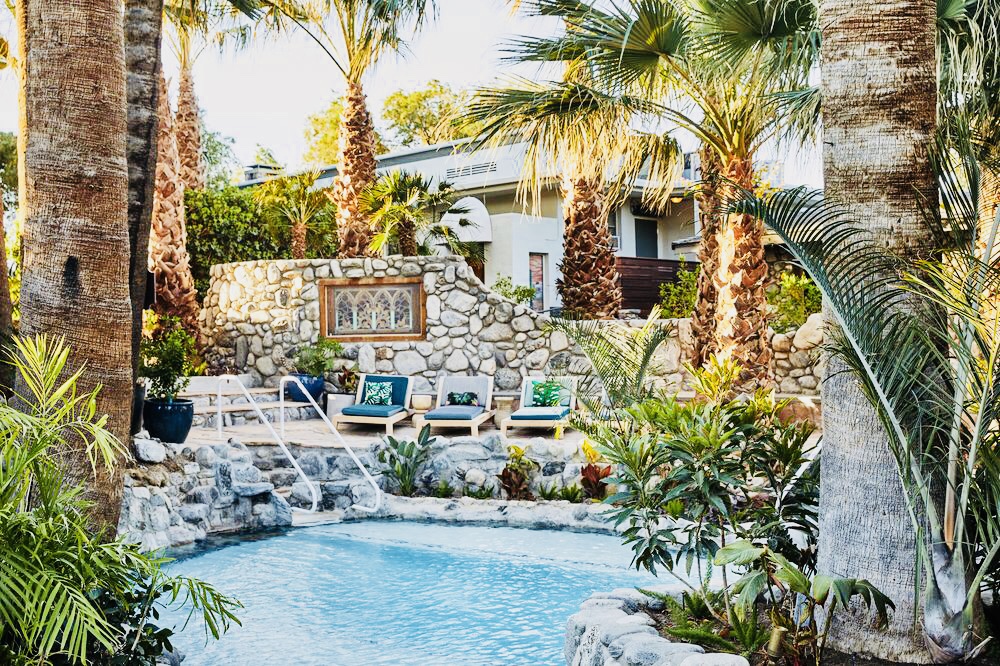 The healing waters are said to be rich in mineral content and high in Lithium which help your body absorb the healing properties. According to a studied traveler, “Bubbling up deep from within the earth, the waters are blessed with virgin springs that are purified over the San Andreas Fault. It is ancient springs, with lots of folklore.” 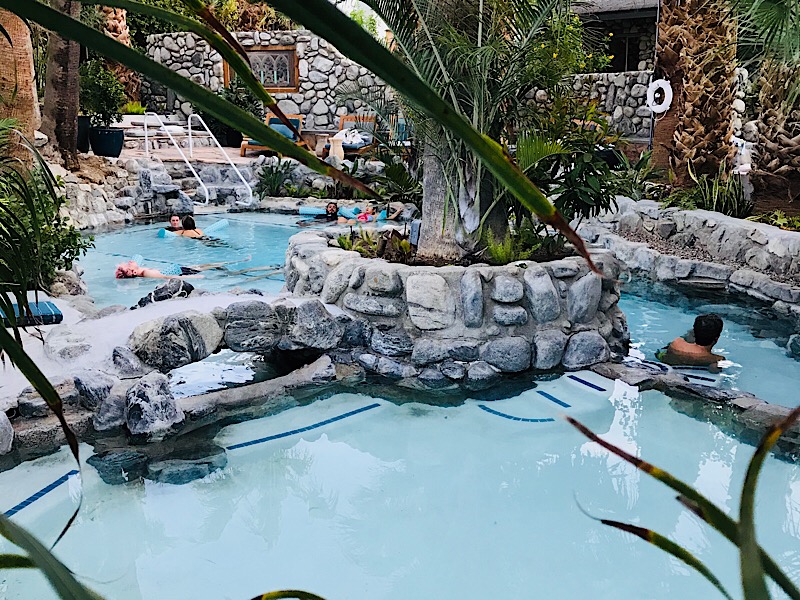 Experts say the water has a perfect balance of PH and Alkalinity. This produces silky mineral water good for the body inside and out. (See, I’m a scientist now!) 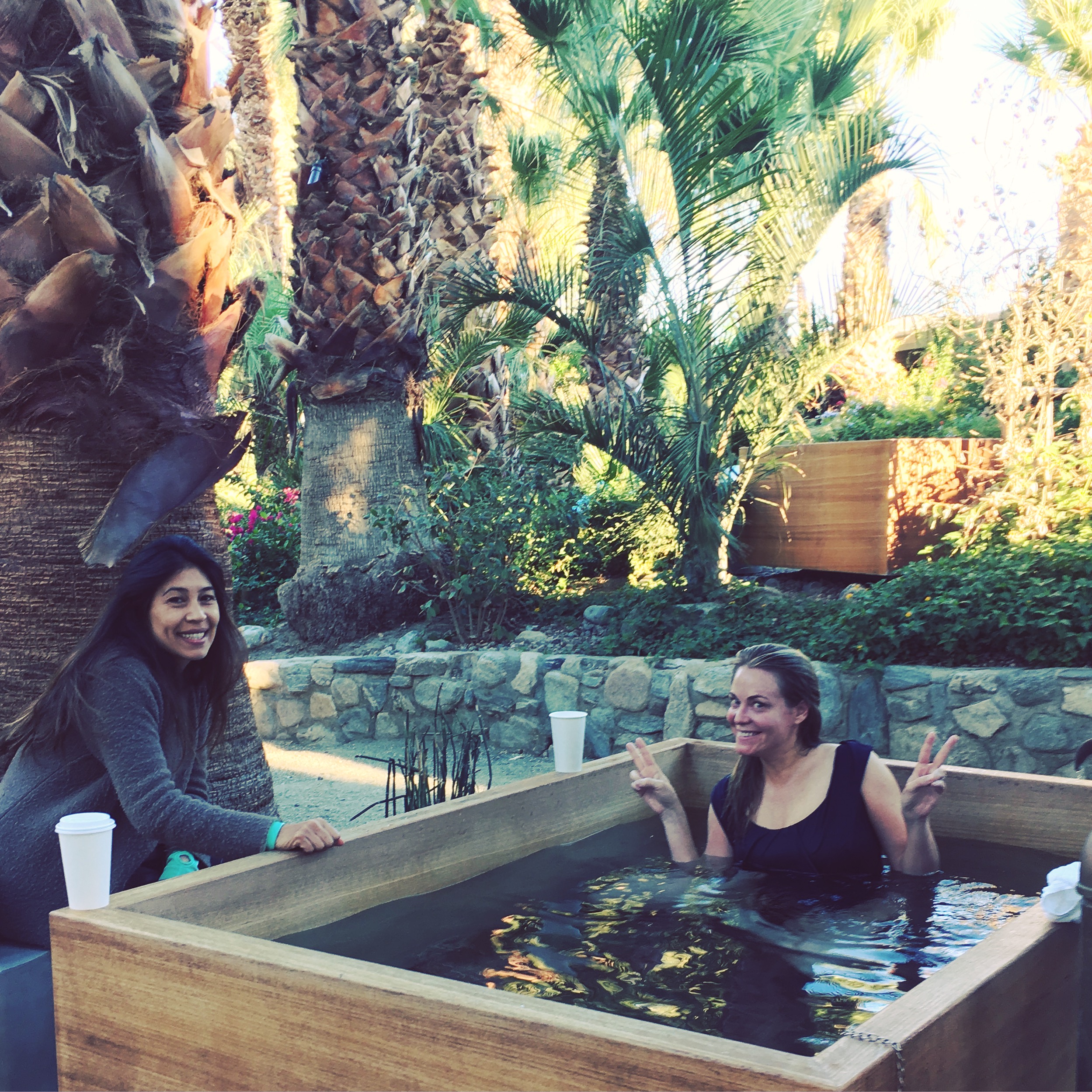 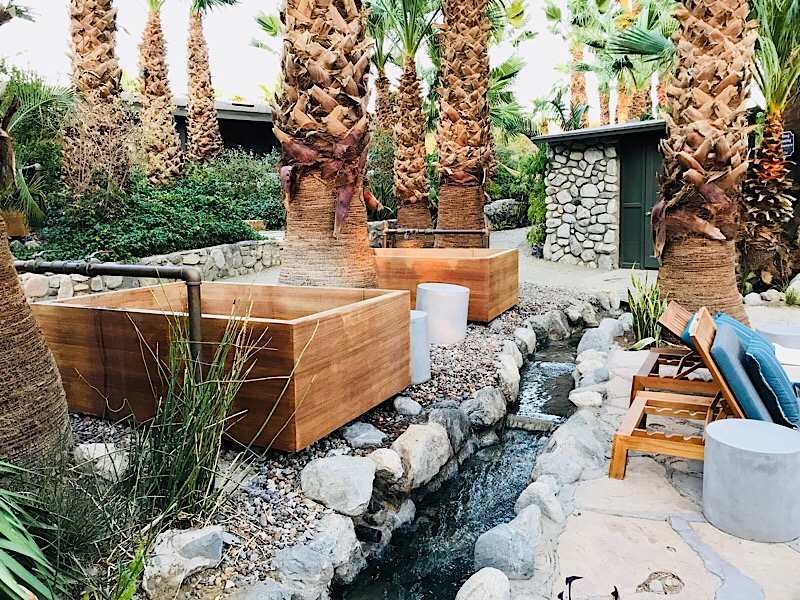 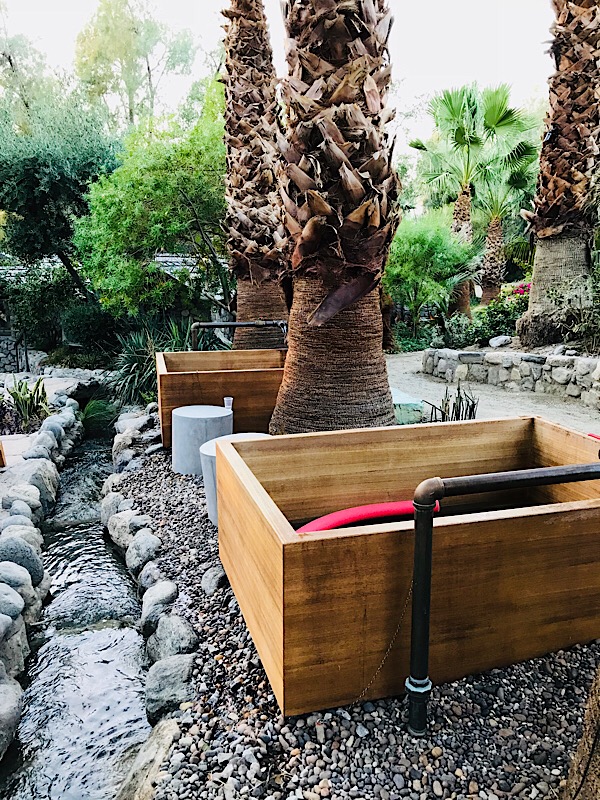 After some serious blissing-out in the grotto, it was time to check out the restaurant. Essense is known for its healthy, gourmet, farm-to-table fare and it doesn’t disappoint. 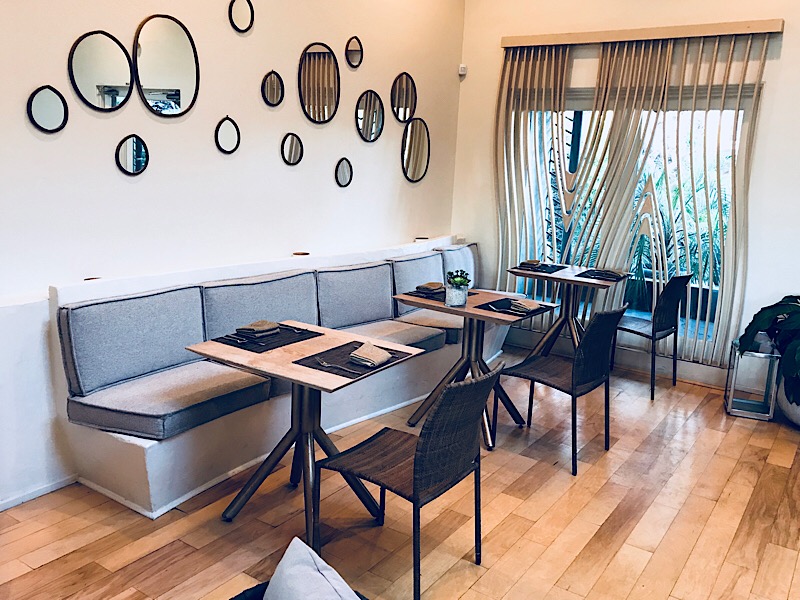 My favorite thing on the menu was the breakfast veggie omelet with Jerusalem artichoke, grilled asparagus, blistered heirloom tomatoes, gobs of Boursin cheese and other assorted yumminess. They also serve up “Hand-crafted healing drinks” (in other words, they make fresh juices.) And they are delicious. 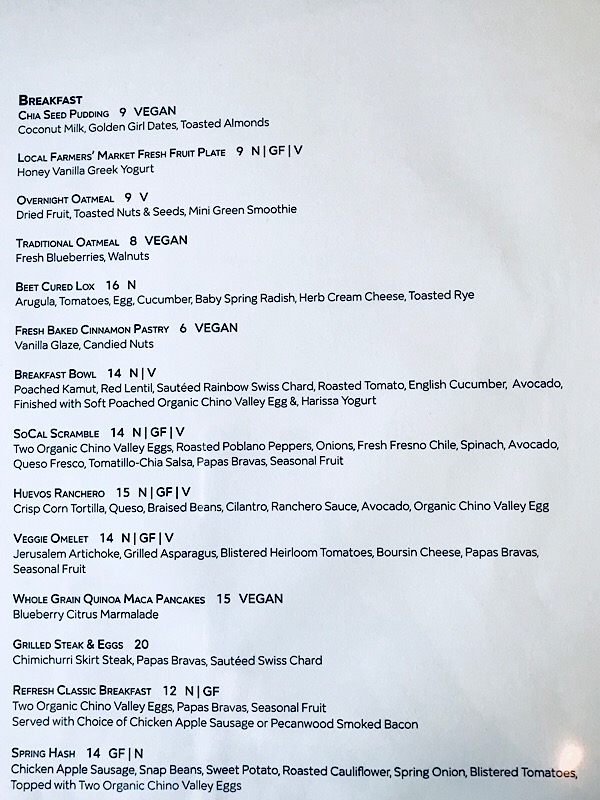 Lunch and dinner is no less mouth-watering, and we ate at this restaurant three times a day. With a scenic view of the desert, it was the perfect place to meet up after a swim in the grotto. 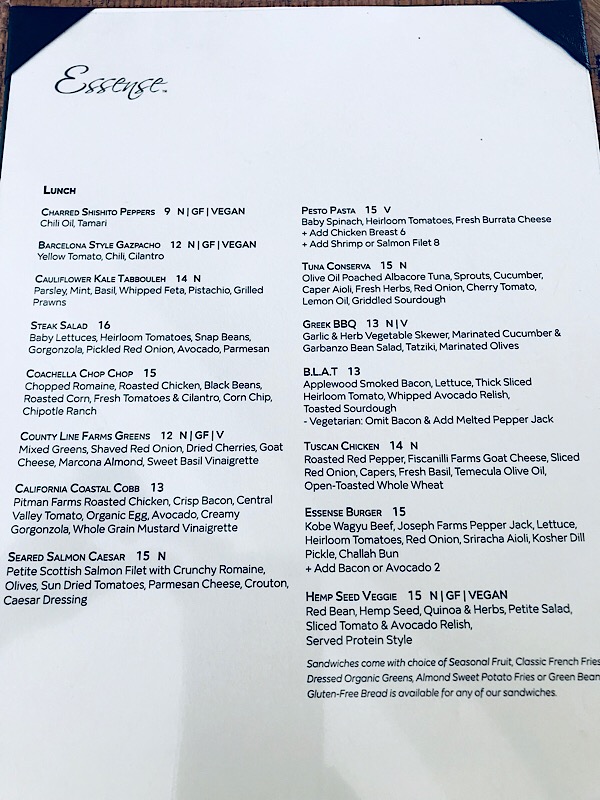 And did I mention they serve wine? 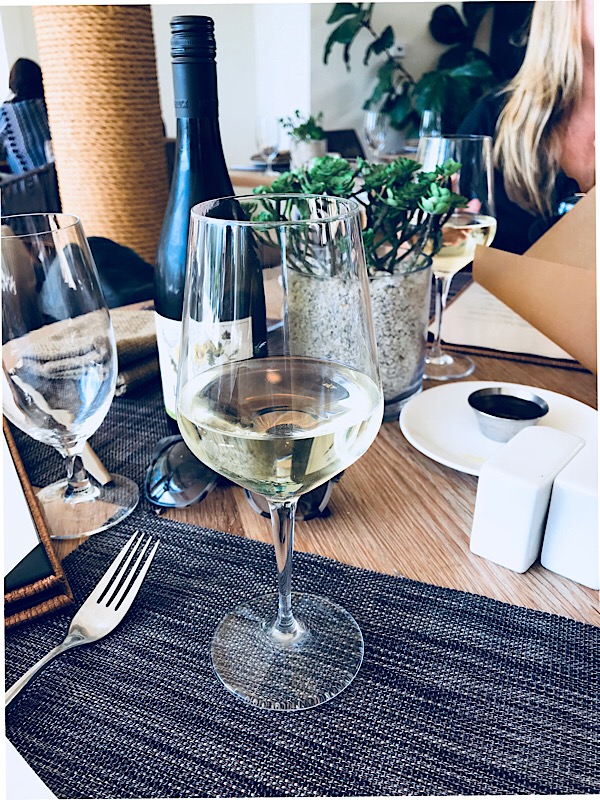 The spa at Two Bunch seems small and unremarkable, located downstairs in what must be an original 1920’s/1930s building. There’s nothing high-tech about it, but the quality of the therapists is what makes it special. The therapists are known to be world-class body workers who often hone their craft in places like China and Tibet. My massage was one of the best I’ve experienced and I would definitely do it again.

A couple of my friends did the mud baths, and said it was interesting and relaxing but “stinky.” You also have to get completely naked and climb over the edge of the mud bath and flash your partner your bits and pieces as your straddle your way into the mud. I’m way too much of a prude for this so I’m glad I missed it!

One of the coolest things about Two Bunch is the classes, which are free and included with your stay. You simply sign up for them when you wake up, because some of them do fill up.

On my second day, I did a 9am yoga class in the Celestial Dome.

I followed that up with a 10:15 Pilates class in the View Point room. Both yoga and Pilates were great. After that, it was a “Balancing your Chakras” class in the serene and tranquil Garden room.

Here, under the guidance of the in-house Shaman, I used crystals learn that most of my chakras were balanced and turning in the right direction. Sadly, my chakras that dealt with “fear” and “connection to the divinity” were seriously whack. (Food for thought.)

After this class it was a quick break for lunch and a swim in the grotto, then it was time for “Vino and Van Gogh” back in the Garden Room. This class was a radical because we painted to music with our non-dominant hand after a short meditation. The art we came up with was super-cool! 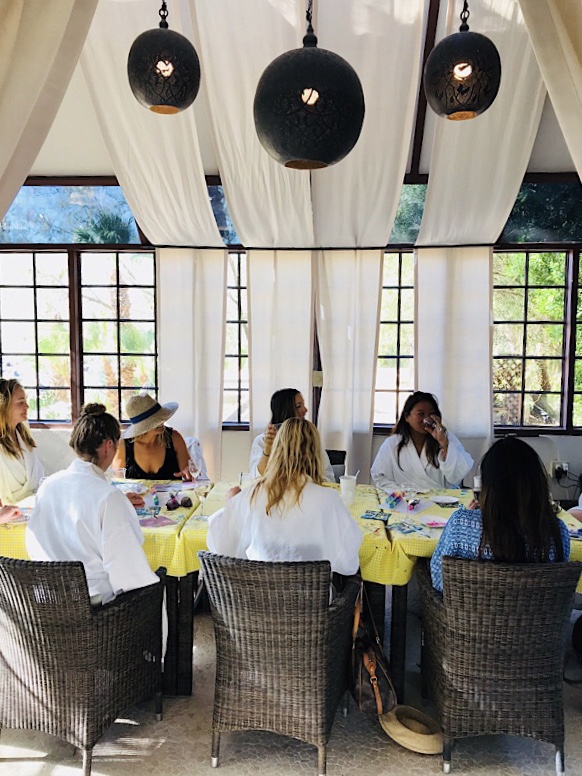 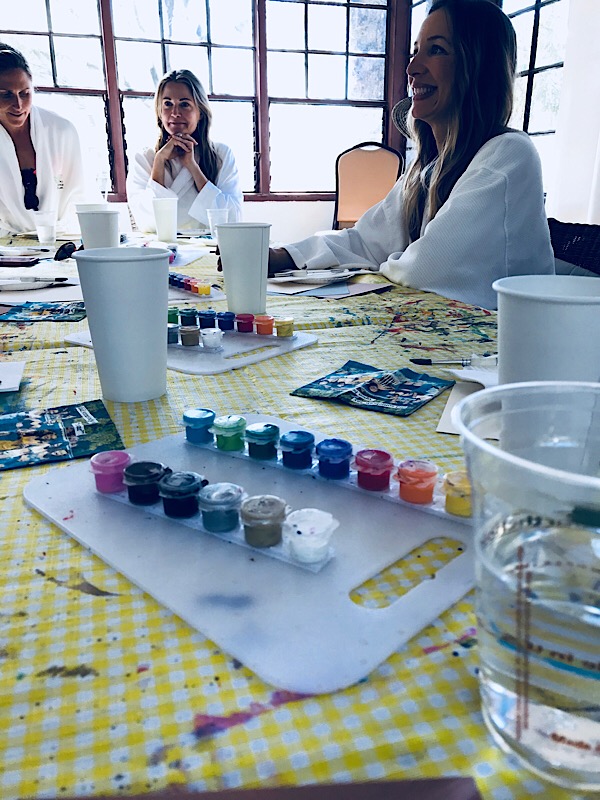 Finally, we lingered in the Garden Room for the Angel Card reading, where we pick two cards and a psychic-like individual told us what they meant to us. I got “Focus” and “Retreat.”

It was a little unsettling when the lady elaborated on what these cards meant to me. I’ve never seen a psychic or anyone like that before. But her words ring true even a few weeks after my visit and I find myself coming back to them.

We met up in one of our “dirt courtyards” that night for a cheeseboard, some wine, and some mala-making. (One of my friends makes the most amazing cheeseboards on the planet, and my other friend runs a yoga company and instructed us how to make the malas. How lucky am I?)

After some bottle drinking, cheese-eating and mala-making it was time for an 80s dance party then off to the birthday dinner in our robes.

A grotto-swim under the desert stars led us to the 9pm “Sound Bath” with gongs, Tibetan singing bowls, and lights. It was surreal and other-worldly. Everyone sprawled out on yoga mats in a semi circle and listened to the sound bounce off the walls of the Celestial Dome. It was powerful at times, and lulling in other moments, to the point you could hear random snores from other attendees.

I was sad to leave Two Bunch the next morning. But I left feeling refreshed, relaxed, and renewed. “You look like you’ve slept for weeks,” my mom said when I got back. But most of all, I had a new perspective. A new outlook that has lingered more than a month since I got home. Will I be back? Most definitely. And I can’t wait to see what Angel cards I draw! 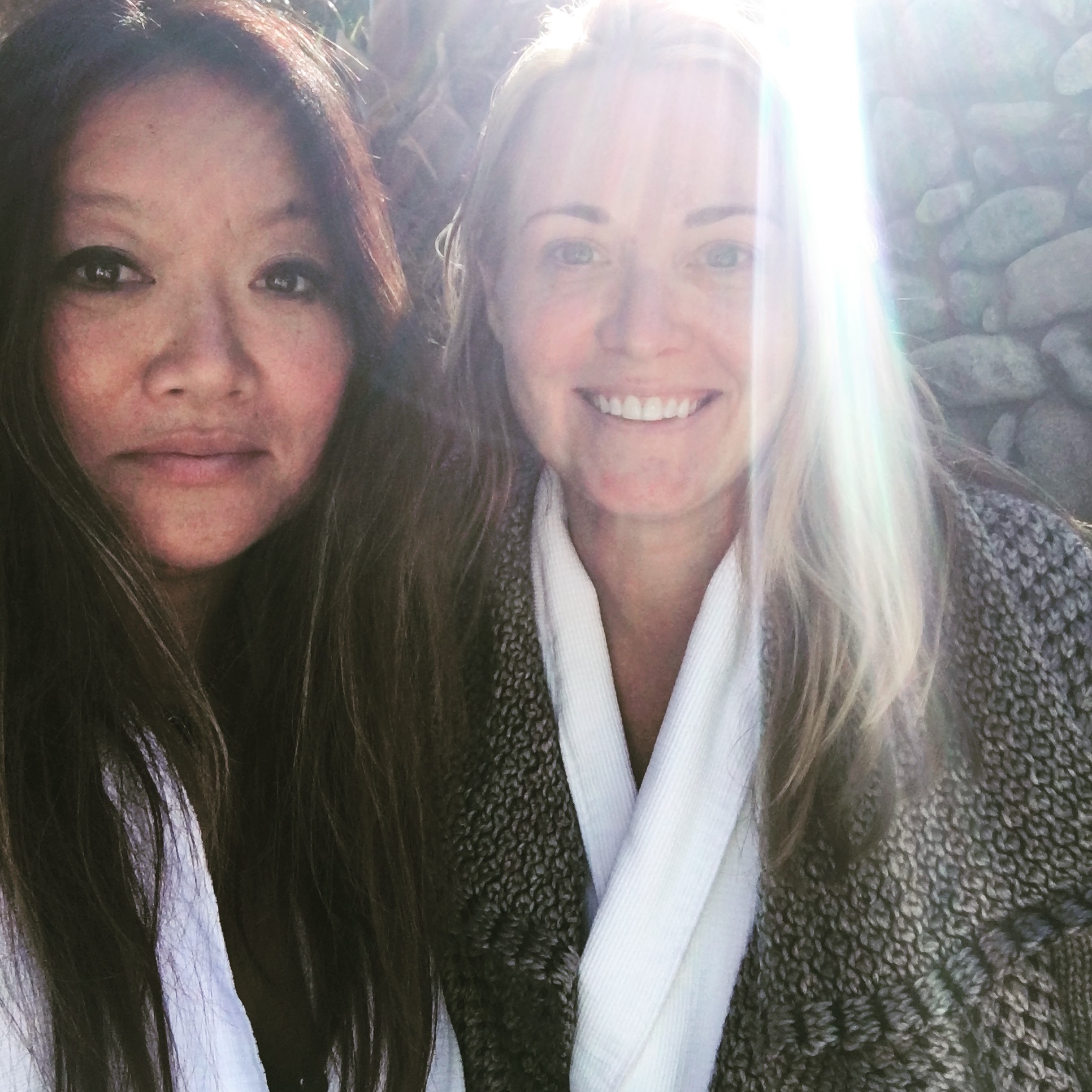 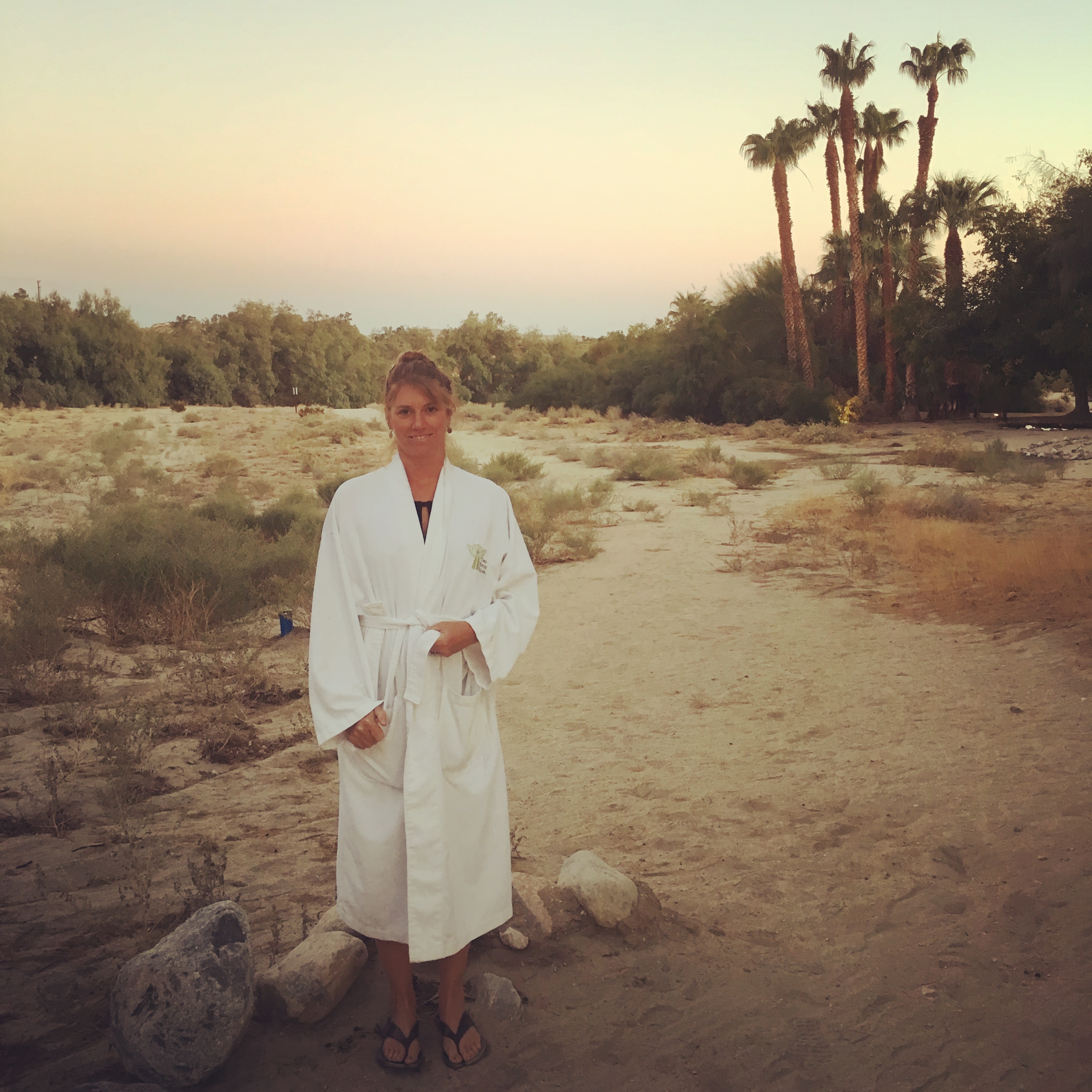